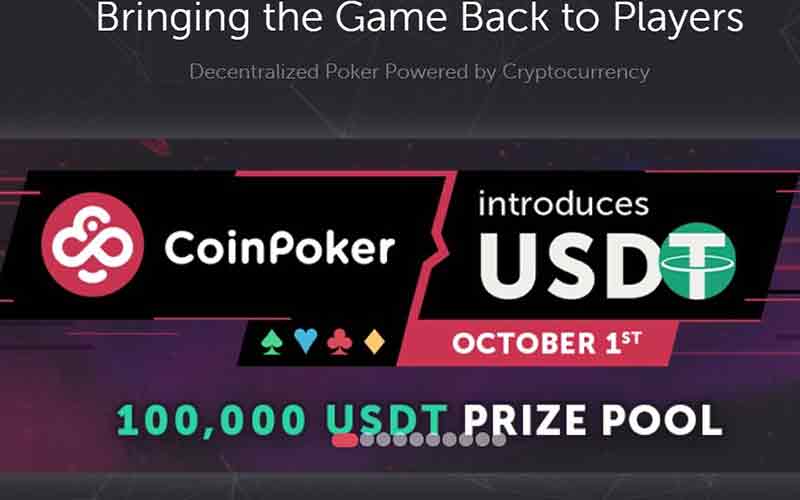 After announcing in mid-September that it would be switching to a stable coin as its main in-game currency, CoinPoker has finally followed through with those plans by integrating USDT. It becomes the very first online poker operator on the planet to pull off such as move, something that is expected to pay off quite decently in both the short and long terms.

USDT, otherwise known as Tether, has been breaking records for quite some time now. In fact, it is widely considered to have a lot to do with the most innovative developments in the digital currency space since the conception of Bitcoin in the late noughties. The currency has grown so popular that even banks might start to consider it as a normal payment option in the near future.

Keeping all that in mind, it is not too surprising that CoinPoker has seen the potential of the digital currency. Perhaps the most compelling reason for the adoption of USDT is the fact that it offers a solution to the prevailing volatility problem that continued to plague a number of digital currencies. A stablecoin also creates room for accelerated growth, something that CoinPoker certainly needs in order to achieve its very ambitious growth plans.

The biggest perks that CoinPoker will be getting from USDT include stability, better transaction speeds as well as reliability. All of these are valued features among the members of the poker community and their existence will certainly make the site an attractive option for even more gamblers.

Despite the fact that USDT will be taking over as the main in-game digital currency on CoinPoker, CHP which is the operator’s digital token will remain in place. According to CoinPoker, “CHP is the currency of the CoinPoker economy, and it will stay this way, except stronger than before.” The company still has some pretty huge plans for the token especially with regards to bringing customers more perks.

Using CHP will not be forced down the throats of the customers but those who choose to use it will gain special access to some exclusive perks and benefits. These will include such things withdrawal fee discounts, dedicated promotions, giveaways, special games, and special access to the sportsbook as well as rakeback. In addition to those, players who will be using CHP will also get 50% more Leaderboard points.

This is a pretty huge leap forward for CoinPoker, the crypto community, and the online poker community. Players can already join the action using fiat, BTC, or ETH if they do not have USDT yet – the in-app currency conversion really comes in handy here.