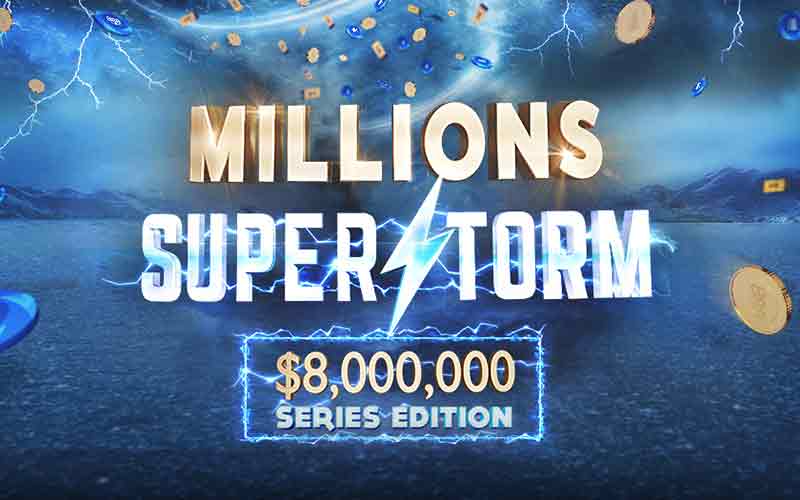 Despite the massive changes that had to be implemented due to the coronavirus pandemic, online poker operators have been finding ways to bring back some action. Already a number of massive poker events have been held and more are yet to come.

Poker players have quite a lot to look forward to in September but the one that stood out the most for us is 888poker’s $8 Million Guaranteed Tournament Series, Millions Superstorm Edition. To begin with, Million Superstorm is the biggest poker festival that 888poker has ever held in nearly 20 years. It will also go down in history as the biggest online poker tournaments series that the renowned poker operator has held in the recent past.

To begin with, the Millions Superstorm will feature a whopping 480 events with the first one kicking off on September 10. The tournaments series will then run all the way to October 11. Buy-ins start from as low as $5.50 and rise all the way to as much as $530. This is a pretty reasonable range, particularly because it will allow all kinds of players to take part in some of that action.

This tournament series is part of the poker operator’s Millions Superstorm promotion that has been running for quite some time now. Participating players will have the chance to compete in tons of fun and exciting daily challenges. The promotion runs for 8 weeks and in that period the operator will have awarded a total of $1 million in cash prizes in addition to the $8 million that is guaranteed for the tournament series.

So, if you want a piece of that, you will certainly need to look out for the cash freerolls, the daily spinners, the bonuses, tickets as well as the Millions Superstorm Daily Freeroll tournaments.

Perhaps the biggest highlight of the entire tournament series will be the Superstorm Main Event whose buy-in is $320 and there is a whopping $1 million cash prize. This will be an action-packed two-day event where the best poker players will battle it out to get a share of the cash prize.

Feel like you are a great player? Well, even if you cannot afford the $320 buy-in, there are ways of getting a piece of that action and possibly a piece of the cash prize too. With 888poker’s Daily Spinners, you might just be the lucky winner of a free entry into the Millions Superstorm Main Event. All you need to do is to spend no less than $5 playing games in the online casino or bet at least $5 in sports events with 1.5 minimum odds.

You could also win an entry into the Main Event via the satellite events which have been running since August 23.