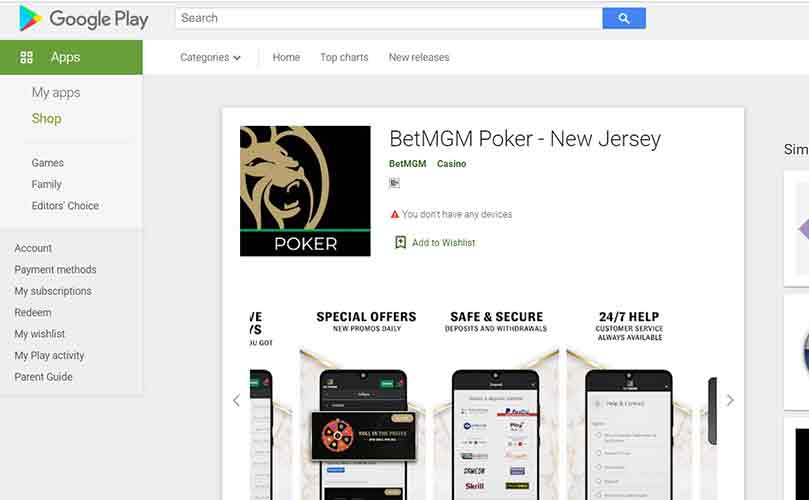 Finding real money gambling apps on official application stores has always been quite difficult. However, things are beginning to change especially for gamers who own Android-powered smartphones and tablets. Google has been changing some of its policies with regards to allowing real money betting apps on its platform – at least in some jurisdictions – and operators are starting to step up to take advantage of the changes.

In mid-March, BetMGM became the very first real money online poker app to become available on the Google Play store. This first became available to poker players in New Jersey who could now easily access the operator’s offerings right from their mobile devices.

For the operators, the change means that they will now be able to deliver their services to even more people in a more streamlined and simple manner. Their customers will no longer have to download any installation files or use the mobile versions of their websites which are more often than not less polished when compared to native apps.

For the customers, there is likely to be even better gaming experiences. For instance, as the number of BetMGM’s poker app users continues to rise, the operator will work hard to retain them. As such, the players can expect more interesting features, design improvements, or optimizations as well as other value-additions to make their poker gaming adventures all the more engaging.

Naturally, the decision by Google to change some of its policies is accompanied by certain implications – most of these have already been pointed out by several concerned parties. By opening the floodgates, it could be safe to assume that the company is prepared to deal with all of the issues.

Perhaps one of the things that customers will need to be vigilant about is the proliferation of copycat apps on the application store. This has been a problem in the past but companies have found ways of dealing with it. Hopefully, BetMGM is already implementing mechanisms to make it stand out lest it gets confused with pretender apps.